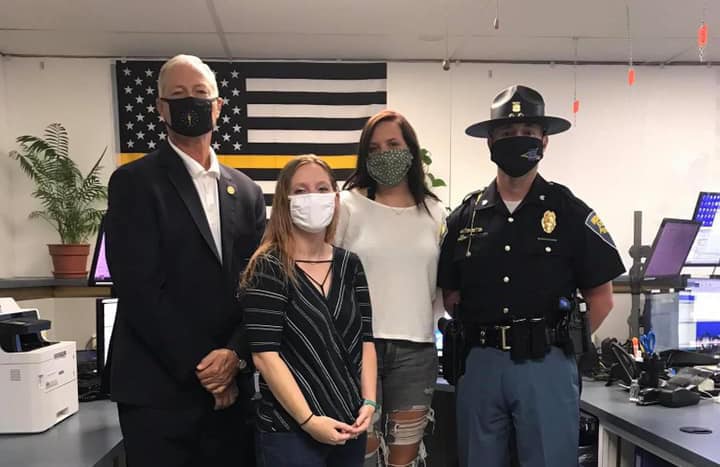 Timing, timing is everything in this unpredictable marathon of life. In a blink of an eye, everything can alter. Such is an incident that occurred on one Saturday night in August. 17-year-old Chloe Strassell had an unfortunate accident while driving down a country road. Her car was overturned. Managing to find her phone, Chloe dialed 911.

Chloe’s call was received by the Ripley County E911 dispatcher, Brittany Dunn. Brittany, who was under training at the time, was a proven asset to the team. Brittany, staying true to her skillset, had immediately assessed the situation and knew Chloe was in greater trouble, and timing was everything in saving Chloe’s life.

Sometimes the events that transpire in our life feel truly divine. And this was one of those days. According to Amanda Smith, who is the assistant director of E911 for the county, most people call for help through cellular phones and they are not always found. However, Chloe was incredibly lucky and she was found soon enough.

Brittany, during this period, kept a calming demeanor reassuring Chloe that she was right there and that everything will soon be alright. Chloe had detected the smoke and alerted Brittany of the danger she was facing. Brittany made sure that Chloe knew she was not alone and that help was on her way. ‘I found you.’ She told her, assuring her that help was near.

And help was, indeed, near. Miraculously, Indiana State Police Squad Sgt. Jared Black happened to be in the area. Sgt. Black found Chloe’s car and after some struggle, managed to safely get her out of the car. Both Sgt. and Chloe sustained minor injuries during this.

Sgt. Black was awarded proclamations of heroism. Alongside him, Brittany, the dispatcher, and her supervisors were given proclamations. It was a miraculous incident. Chloe is now safe and able to return as a senior.

As Chloe gets to continue her life, she has many heroes to thank. Everyone who played a role in saving Chloe’s life was a hero, including Chloe herself. Brittany, who had proven herself only three days after joining the department, was praised by Chloe. She presented her with flowers and expressed her gratitude for being with her in the time of distress.

Brittany was surprised by all the recognition she had for a job so well done. She believed she was merely doing her job. But it was much more than that. In times like this, every minute counts, and every word matters. The demeanor you keep while helping someone in a distressing situation can affect the outcome. Dispatchers, thus play a very significant role in saving lives. As Brittany remained calm, she encouraged Chloe to do the same. Keeping calm is the best way to combat a difficult situation.

Brittany maintains the stance of her supervisors, “It’s training and technology that makes the difference.” She gives a message to the public saying people should always be mindful of where they are driving. Knowing your location can save a lot of time. And when it comes to survival, timing is everything!