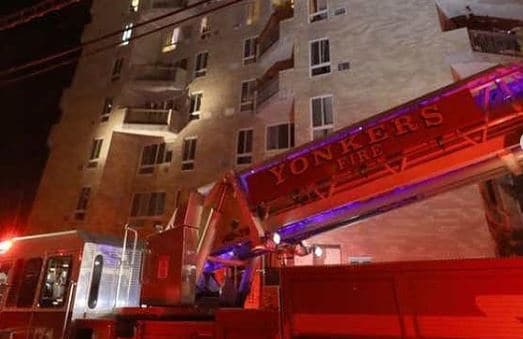 A four-alarm fire broke out at a high-rise in Yonkers on Wednesday evening, injuring three firefighters and six residents.

According to CBS, the fire began on the third floor of a 27-story building located on Glenwood Avenue.

A little after 6:00 PM, a fire starts in one of the resident’s homes. As they were fleeing, they left their third-floor apartment door open, letting smoke escape into the rest of the building.

In a statement to Journal News, Citrone said, “When the resident fled, the apartment door was not closed, and the fire spread to the entire hallway, causing a blowtorch effect that took numerous companies to extinguish.”

“Heavy smoke traveled throughout the entire building and resulted in numerous rescues and calls for help.”

Citrone said the firefighters were able to put out the blaze in an hour. However, they needed four hours to check the building’s apartments and work with the smoke conditions.

As a result of the fire, 20 of the apartments are uninhabitable. Out of the 27 floors, 17 did not have any power on Thursday morning.

The Red Cross is stepping in to help 28 adults, eight children, and a dog. According to spokeswoman Carolyn Sherwin, 13 total families are temporarily uprooted as a result of the fire.

The fire drew every company in the city to assist with rescuing and evacuating the building’s residents. Also, Yonkers police came to assist, as did Empress ambulance crews.

The Seven Pines Tower fire response shows a heavily coordinated effort between the multiple fire companies in the area. Each company used its training and expertise to rescue the residents from the building safely.

The firemen did all of this within an hour, in a relatively large building. This swift response likely prevented more serious injuries from occurring.