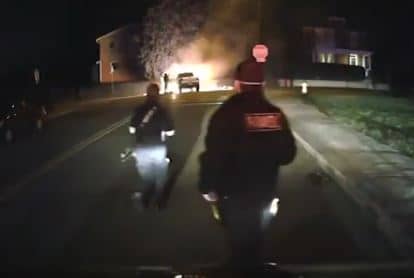 A little after 1:30 a.m. Thursday, a Pennsylvania neighborhood was startled awake by a loud crash. The commotion was quickly followed by flames engulfing a single-vehicle.

The accident took place near the Carlisle station of the Cumberland Goodwill EMS. Naturally, the EMT’s from that station were the first to arrive on the scene.

Running Into The Flames

According to News Break, Cumberland Goodwill EMS captured footage of EMT Grace Snyder running towards the burning vehicle. As she approached, she could see the driver struggling to get himself away from the car.

Officials stated the vehicle’s tires had already begun to explode before the EMS team arrived on the scene, explaining the loud pops neighbors heard and the neighbor’s difficulty to rescue to man.

“The bystander was trying to help the individual out of the vehicle or help them away, but the car kept blowing up with the tires…. the tires kept exploding,” said Snyder in a statement to Fox43 News.

According to ABC27, Snyder placed her arms around the man to help him get away from the flames.

I’m like, OK I’m going to bear hug you and we’re going to walk, so that’s what we did and while I was walking backwards, all of the tires started blowing up, and it was very loud noises, and it was a little scary to hear,

The older man went to the hospital for minor injuries, official say. Snyder, who has only been at Cumberland Goodwill for six months, didn’t think twice about her response.

Level Headed Actions Despite Her Age

EMT Snyder, who is also a volunteer firefighter, is 18-years-old. She completed her EMS training while still in high school, showing a level of dedication uncommon for her age group.

Snyder recently completed her training on vehicle and interior fires, learning how to approach and handle these situations.

Only 20-seconds after she pulled him away, a larger portion of the vehicle exploded. Her focus and lack of hesitation likely saved this older man’s life.