Sergeant Stubby – Hero of the Trenches 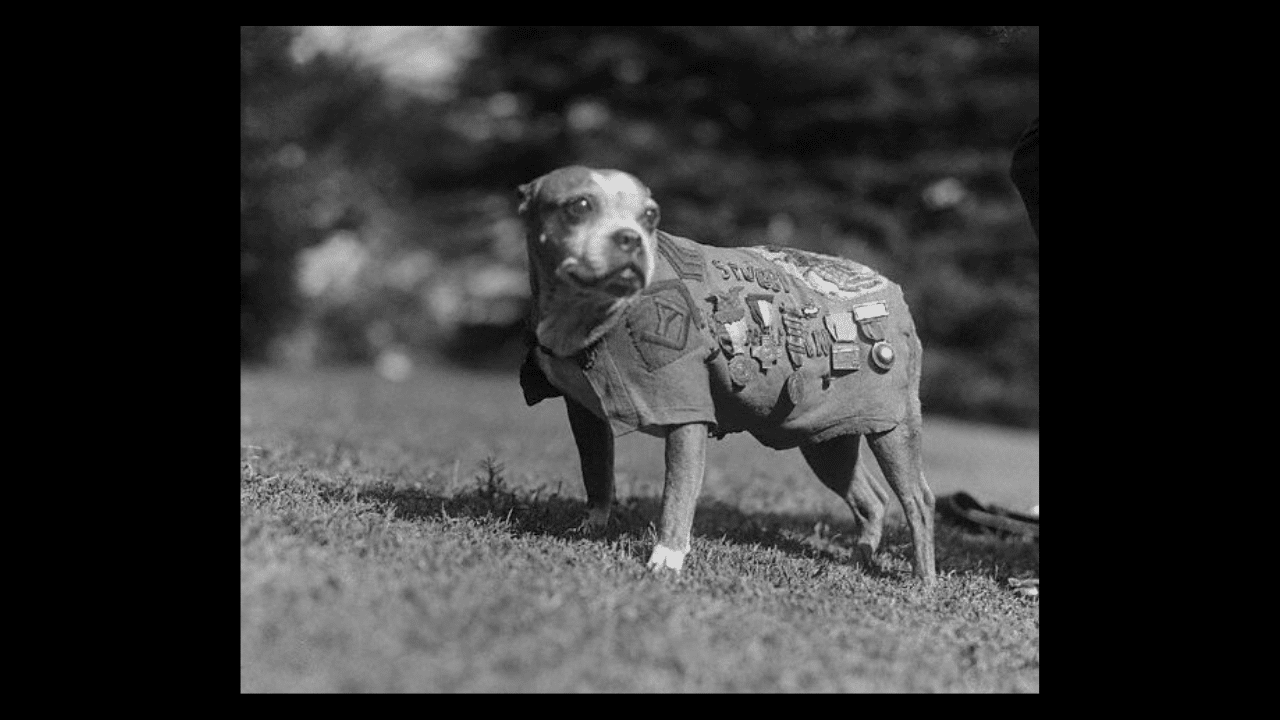 It’s February 1918, and you’re a soldier stuck in a freezing, mud-filled, rat-infested trench. You’re trying to catch some shut-eye before the next wave of German shelling begins, and you collapse in exhaustion. In the early morning hours the American line is doused with mustard gas. What might have been a devasting loss to the American forces, was completely routed by the persistent barking of the smallest member of the 102nd Infantry Regiment. Stubby, a Staffordshire terrier mix, ran from solider to solider and alerted them to their danger, saving them all.

A few months before, Stubby had been injured in a mustard gas attack and had been sent to recover at the back of the line. Upon his return, he arrived equipped with his own specially designed gas mask to protect him. He learned to warn his unit of the poison gas attacks, and because he could hear the high-pitched whine of incoming artillery shells before his human counterparts, his barking became a life-saving early warning system. He was even able to locate wounded soldiers in “no man’s land.”

This amazing little pup later attacked a German spy as he was attempting to map out the allied trenches. Stubby’s attention led to this spy’s capture and earned him a nomination for Sergeant from the commanding officer. Stubby served in 17 battles and survived attacks of mustard gas and shrapnel wounds.

To anyone with a beloved dog, and especially those that rely upon a service dog for comfort and help, it’s not hard to imagine the amount of joy that Stubby brought to the men on the French battlefield. He just happened to show up at the Yale University training grounds just prior to their unit’s deployment and was smuggled to the front by Corporal James Robert Conroy.

“My grandfather was always clear: He was a service dog,” said Curt Deane, Conroy’s grandson. “He gave the troops comfort, he gave them support. He used to run through the trenches and warn them about gas attacks. He used to go outside of the trenches and into this sort of no-man’s land, between the U.S. and the German trenches, and stand by soldiers who had been injured until the medics could come and get them.” (Source)

He was smuggled back home by the same Corporal Conroy and enjoyed a life of celebrity. He met three presidents and appeared on the vaudeville stage. Not bad for a canine recruit!

“Stubby’s story transcends time, in that the story of a dog’s loyalty, bravery and devotion to his human companions will always strike a chord with the American public, dog lovers that we are,” says Kathleen Golden, curator of the National Museum of American History’s Division of Armed Forces History. “Humans are fallible, but dogs are always true, and they will selflessly lay down their lives to protect what they love.” (Source)

Stubby’s story has been made into a 2018 animated film that you can share with your children. Sgt. Stubby: An Unlikely Hero is available to rent via Amazon Prime. Share a little World War I history with your children as you enjoy watching a dog do what dogs do best—love and serve their humans.