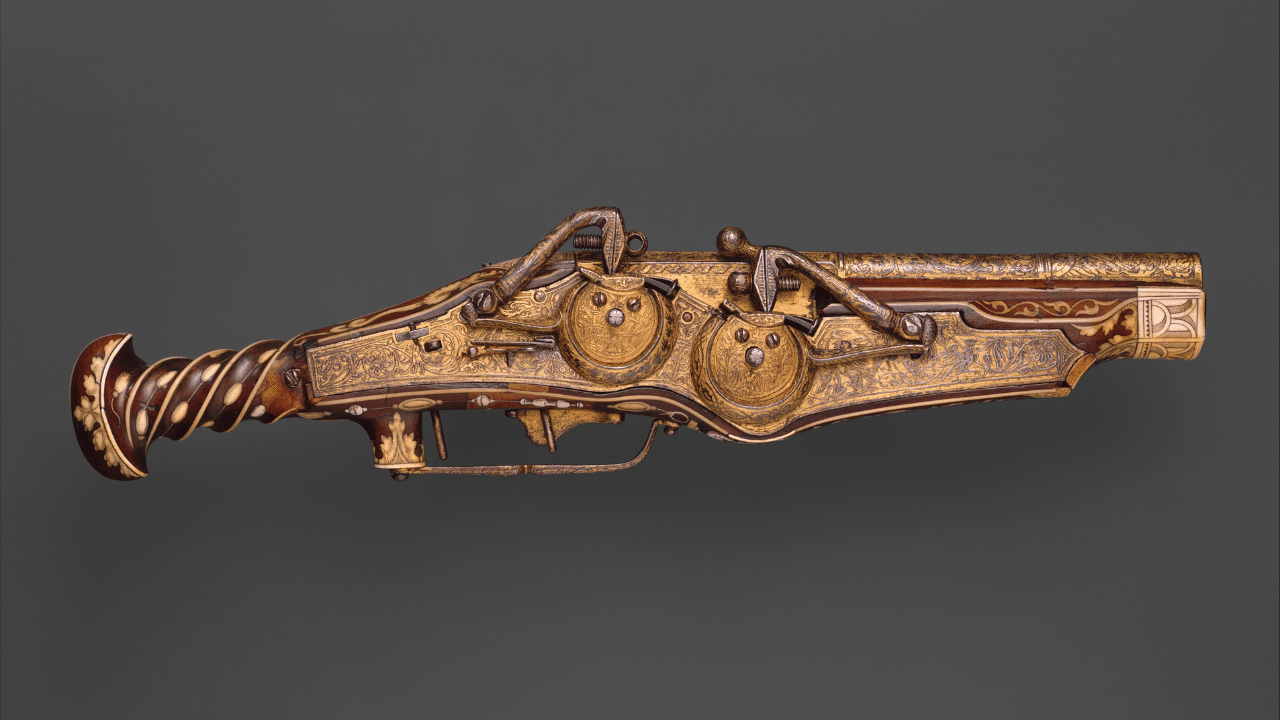 It can be argued that weapons were among the very first of man’s inventions. Born from the necessity to defend home and hearth, this is not surprising.

Arms are the only true badge of liberty. The possession of arms is the distinction of a free man from a slave.

Early in our history, swords and spears, axes and arrows were the tools of choice for both warfare and home defense. Gunpowder was first used in warfare by China around 904 AD, and by the 1500’s spectacularly detailed personal defense weapons were available to royalty and the very wealthy. Although highly ornamental, and sometimes used for show, they were indeed lethal.

Designed by Peter Peck in the 1540’s, a true master-craftsman of watches and guns, this wheellock pistol is spectacular in detail. Created for Emperor Charles V and made of steel and cherry wood, the decoration includes his personal insignia: the double-headed eagle and the pillars of Hercules in gold and staghorn. His Latin motto, “Plus Ultra” (translated to “more beyond”), is also inscribed.

One of the oldest revolvers still in existence is a flintlock with eight chambers. Made in 1597 by German gunsmith, Hans Stopler, it’s beautifully crafted with decorative brass, bone, and mother of pearl. It does not automatically rotate like modern revolvers and must be manually moved. About a foot and a half long, this is a large weapon and would weigh quite a bit. The first known owner was a professional soldier who fought on the Danish-Norwegian side in the Thirty Years’ War, Georg von Reichwein.

When we think of the early colonists, we often think of the Pilgrims, but they were not the first settlers. When Jamestown was established, fresh off the boat were 35 “gentlemen,” 40 soldiers, and various artisans and laborers. The soldiers had served and knew how to fight. When Jamestown was founded, the land was still very much up for grabs and the early colony was vulnerable to the Spanish. These men were prepared to fight for King and Country.

They brought with them a motley assortment of weaponry and body protection that ranged from full suits of armor for a gentleman of means, to the regular foot soldier’s garb. These “pikemen,” as they were known, wore uniforms that included a helmet, breast and backplates, and two tassets of metal to protect the upper thigh. A pikeman wielded a 16′ – 18′ spear-like pole—the pike. These men were the primary means of protection for the musketeer when they needed to reload. For the musketeer, of course, their weapon of choice was the musket.

In 1609, 300 matchlock, snaphaunces, and firelock muskets were cataloged in the Jamestown armory, along with heavy artillery. Despite our visions of buckled-shoe pilgrims, many of the musketeers would have been arrayed much like this gentleman.

At 100 yards out, a musketeer could hit his enemy. His musket could be fired in the rain unless there was a heavy downpour. In the earliest days, the matchlock musket was widely used. It earned its name from the slow-burning cord that was soaked in saltpeter and applied to a gunpowder charge that would then fire the shot. Most musketeers were grouped together to fire a volley that could cause great damage.

Douglas MacArthur once said, Whoever said the pen is mightier than the sword obviously never encountered automatic weapons. But I would counter that the “shot heard around the world” was probably delivered from a relatively simple weapon by today’s standards. The British Military Short Land Pattern Musket (or British “Brown Bess” Musket) was truly the everyman’s weapon, and it is what enabled the newly minted United States to win the most lopsided war they had faced in their short history.

Brown Bess was a ten-pound, single shot symbol of personal freedom. It was the men behind the muskets, hungry for freedom, that used these weapons for an honest chance at life no matter their status or means. The everyman, in possession of their own arms, made all the difference. The simple musket opened the door to the true badge of liberty.