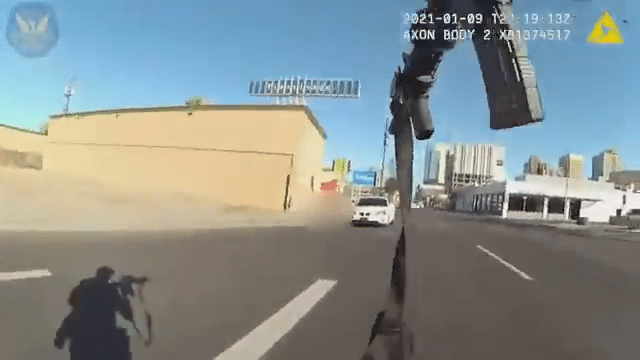 However, the picture was a lot clearer for Phoenix officers responding to multiple 911 calls for the same incident outside a Travelodge Hotel. From the calls, Police gathered that a man was beating his wife and child.

A panicked woman called 911 on January 9th as she was running, afraid for her child’s life and her own.

“He just took my baby, he has a gun, he’s loaded, he took the baby. He’s trying to kill him. He’s shooting, he fired.”

In the video, you can see a man holding what appears to be a child.

Drivers in the area also called 911 to report the man holding a driver of a white car at gunpoint and firing shots.

When officers arrive on-site, 37-year old Paul Bolden was holding the child and the gun. Then he fires a shot off in the direction of the officers.

According to footage, the initial officer pleads with Bolden to drop the gun and put the kid down. Bolden does not do either.

“He has the kid hostage right now. He has a gun. He has made one gunshot already,” an officer is heard saying over the radio. The officer then requests additional units. He also asks for traffic to be blocked off.

Additional officers arrive on the scene. After their arrival, Bolden holds the gun to the child, and an officer shoots Bolden with a rifle.

According to ABC News, the child, Bolden’s son, had no injuries from the stand-off. However, Bolden went to the hospital, where he died from his injuries. After the incident, the child went back to his mother.

Calls involving partners fighting can be incredibly hostile. However, when a child is a part of the equation, the dispute can turn deadly.

In this case, the suspect already had shown the officer that he was unwilling to hand the child over. He also demonstrated unpredictable actions.

These actions were a direct threat to the life of an innocent child and the lives of bystanders. The officer felt comfortable enough in his training to take the shot to mitigate the circumstances.