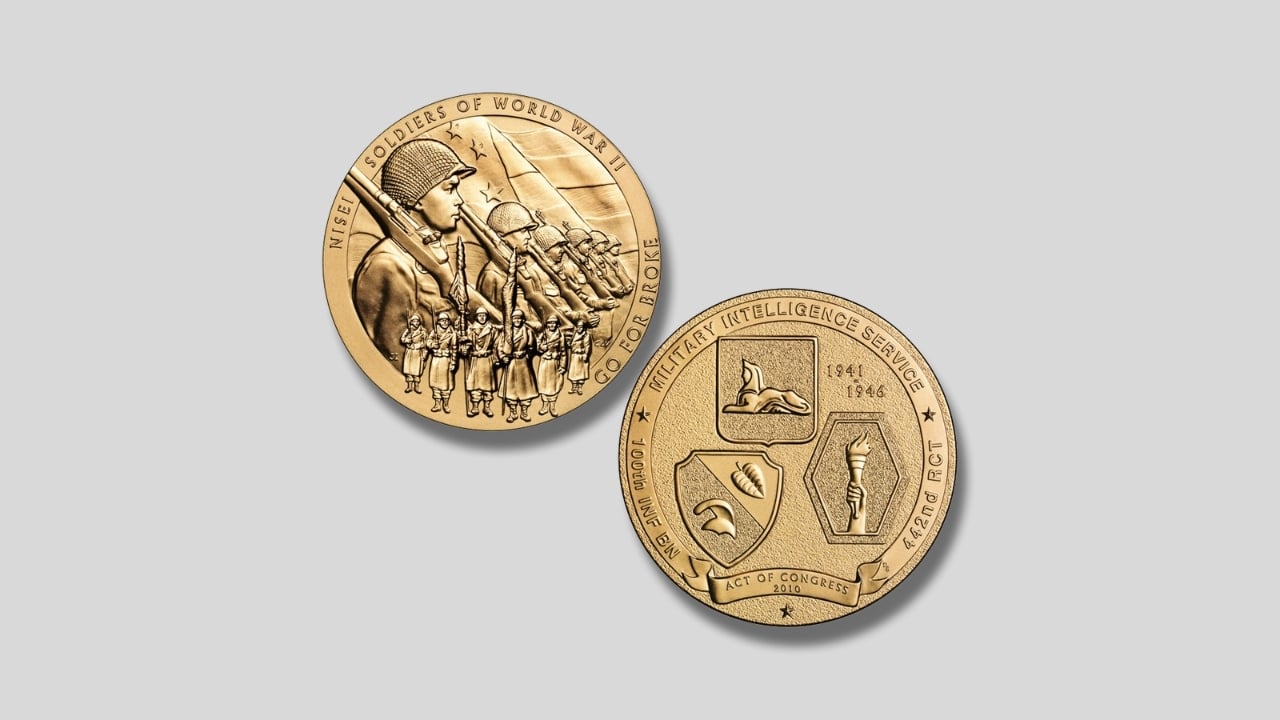 After Japan bombed Pearl Harbor, Hawaii, on December 7, 1941, crowds swarmed the recruitment offices. Huge numbers of red-blooded American boys wanted in on the war and were ready to serve. What is less known, is that many Nisei, or second-generation Japanese Americans, also joined up to fight. Despite real prejudice after the bombing, this did not deter the Nisei. These young men were involved in many different areas of service from intelligence to the frontlines, and some gave the ultimate sacrifice.

The United States Army 442nd Infantry Regiment is a perfect example of the fighting spirit found in the Nisei. Formed in March of 1943, more than 12,000 Nisei responded to the call to fill the segregated Japanese American 442nd Regimental Combat Team (RCT). Many had their own families in the Japanese internment camps, and indeed, 1,500 were released from confinement in order to join the unit. 2,686 men joined from Hawaii alone. When deployed to the European battleground, they were attached to the 100th Infantry Battalion, another Nisei unit. Known as the 100th Infantry Battalion/442nd Regimental Combat Team, they were a formidable fighting unit.

Their motto, “Go for Broke,” seems to have been deeply personal and it is reflected in the sheer number of awards and medals earned in less than two years. The 100th/442nd is the most decorated unit for its size and length of service in all of U.S. military history. Close to 14,000 men served in that short span of time, many gave their lives, and over 18,000 citations and medals were awarded to these courageous men. Among them were over 4,000 Purple Hearts, 4,000 Bronze Star Medals, and 21 Medal of Honor recipients.

One of these Nisei heroes was Sadao Munemori, a United States Army soldier. He sacrificed his own life to save his fellow soldiers. He was posthumous awarded the Medal of Honor and was one of the only Japanese American soldiers to receive it during World War II.

His citation displays his bravery:

He fought with great gallantry and intrepidity near Seravezza, Italy. When his unit was pinned down by grazing fire from the enemy’s strong mountain defense and command of the squad devolved on him with the wounding of its regular leader, he made frontal, one-man attacks through direct fire and knocked out two machine guns with grenades. Withdrawing under murderous fire and showers of grenades from other enemy emplacements, he had nearly reached a shell crater occupied by two of his men when an unexploded grenade bounced on his helmet and rolled toward his helpless comrades. He arose into the withering fire, dived for the missile and smothered its blast with his body. By his swift, supremely heroic action Pfc. Munemori saved two of his men at the cost of his own life and did much to clear the path for his company’s victorious advance.

Another Nisei unit, the 522nd Field Artillery Battalion, were the only ones to be shipped to Germany. They were a “roving battalion” that supported other army units as needed along the 1,100 miles of German front lines. In April of 1945, while scouting the line, the 522nd discovered barracks encircled with barbed wire. They had stumbled upon Kaufering, one of the worst slave labor satellite sites associated with Dachau Concentration Camp in Germany.

They liberated approximately 3,000 prisoners and were truly appalled at the devastation they witnessed. The unit attempted to help by offering clothing and food, but they had to stop sharing their rations when their food was overwhelming the digestive systems of the newly released prisoners. The Nisei were instrumental in the rescue of these tortured people.

In October of 2010, Congress approved the granting of the Congressional Gold Medal to the 442nd Regimental Combat Team and the 100th Infantry Battalion. This medal was also awarded to the 6,000 Japanese Americans who served in the Military Intelligence Service during the war. This Japanese American unit provided valuable translation, interpretation, and interrogation services during the war. It was said by Major General Charles Willoughby that, “The Nisei shortened the Pacific War by two years and saved possibly a million American lives.”

It would be an understatement to say the Nisei faced an uphill battle while serving their country. Despite the prejudices of their time and the distrust of their nation, the Japanese Americans of the Nisei served their country with honor and helped earn the freedoms we enjoy today. To learn more about the Nisei and their military history, visit the Go For Broke National Education Center.