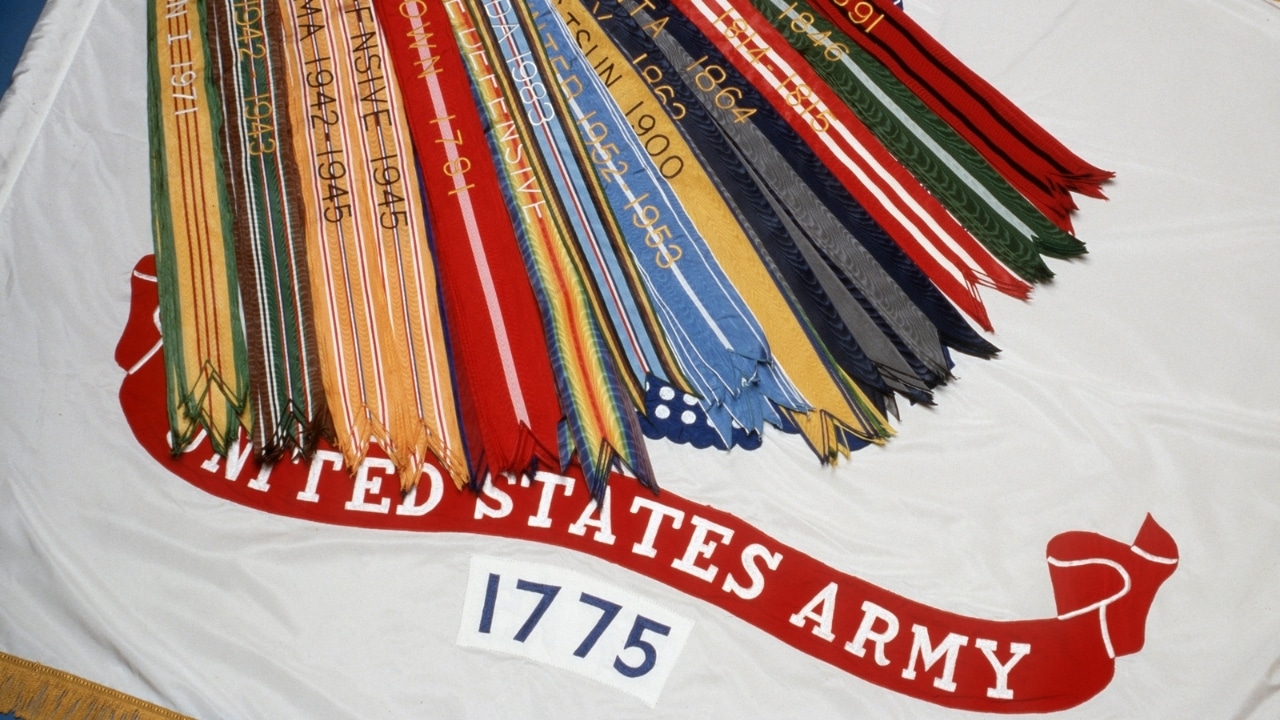 Those who have seen the wreath-laying ceremony at the Tomb of the Unknown Solider at Arlington National Cemetery know it is an awe-inspiring event.

While watching the recent ceremony on January 20, my spouse and I noticed the many ribbons blowing in the wind from the top of the military flags. We started wondering what they were for and then we noticed that the newly created U.S. Space Force did not have any. I theorized that they were for battles or campaigns each branch had achieved. As it turns out, that was a pretty good guess. The U.S. Army, U.S. Marine Corps, U.S. Navy, U.S. Air Force, and U.S. Coast Guard all have many campaign (or battle) streamers, but each branch is different in number, style, and decoration.

The use of battle streamers had its beginnings in antiquity when various emblems were carried into combat. Armies of Egypt and Assyria, for example, placed sacred objects at the tops of poles, then adorned them with streamers. The eagle of Imperial Rome was recognized throughout the known western world. In time, solid objects gave way to cloth banners. Medieval knights attached distinctive streamers to their lances. Colors became a rallying point in battle, an honor to bear and defend. Among the most prized trophies of war were the tattered standards of a defeated enemy. *

Campaign streamers gained status and use in America during the Civil War. The Army embroidered battle names on their organizational colors. This practice was replaced with engraved silver bands that wrapped around the flag staff. In World War I, due to the scarcity of silver, General Pershing permitted the use of small ribbons embroidered with the names of World War I campaigns. By 1920, the tradition was firmly established. By 1921, Army flags carried the current style of streamers measuring 2 3⁄4 inches wide and 4 feet long.

As the U.S. Army was the first to use battle streamers, it makes sense that it would have the largest number of them at 190. The Army designates a separate streamer for each important action in every war for which they played a part. Some Army streamers are plain, but most have the campaign name, dates, or location embroidered on it.

The U.S. Air Force and Army have remarkably similar requirements for streamers largely because the Air Force was part of the Army until they became their own branch in September of 1947. They began using battle streamers in 1956 and have 135 that also designate the battle, dates, or location.

In contrast, the U.S. Navy has 33, and began using them in 1971. They adorn their streamers with bronze or silver stars, and do not designate any battle names or campaigns. Each streamer stands for an entire war or campaign. For example, there is a single Navy streamer for “World War I Victory” as opposed to the 13 that the Army uses to name different battles of World War I. Navy streamer size is also one foot shorter than the Army. An interesting side note, if the Navy awarded a medal for a specific war or service, the streamer’s design and coloring are the same as the ribbon attached to the award.

The U.S. Marine Corps began using streamers in 1939 and have 55 that display bronze, silver, or gold stars, two streamers bare the names of locations, and some have other devices embroidered on them. The USMC follows the same pattern as the Navy and uses one streamer for a whole war or campaign, with the same sizing.

The United States Coast Guard followed suit in 1968 and abides by the pattern of the Navy and the USMC. Only three of the Coast Guard’s 43 streamers have any decoration, while all the rest are ribbon-only. The Coast Guard uses the longer size of four feet.

As the eagle was the symbol of the domination of the Roman legion, and the banners lifted by medieval knights signified for whom they went to war, so too does each battle streamer demonstrate the combined strength and power of the United States Armed Forces. Every one of these battle streamers represents not just one branch, battle, or war, but the thousands upon thousands of individual Americans that served their country, on the hundreds of battlefields across the decades of our history. They are bright reminders during national celebrations or solemn ceremonies of the sacrifice and service so many have rendered to our country.