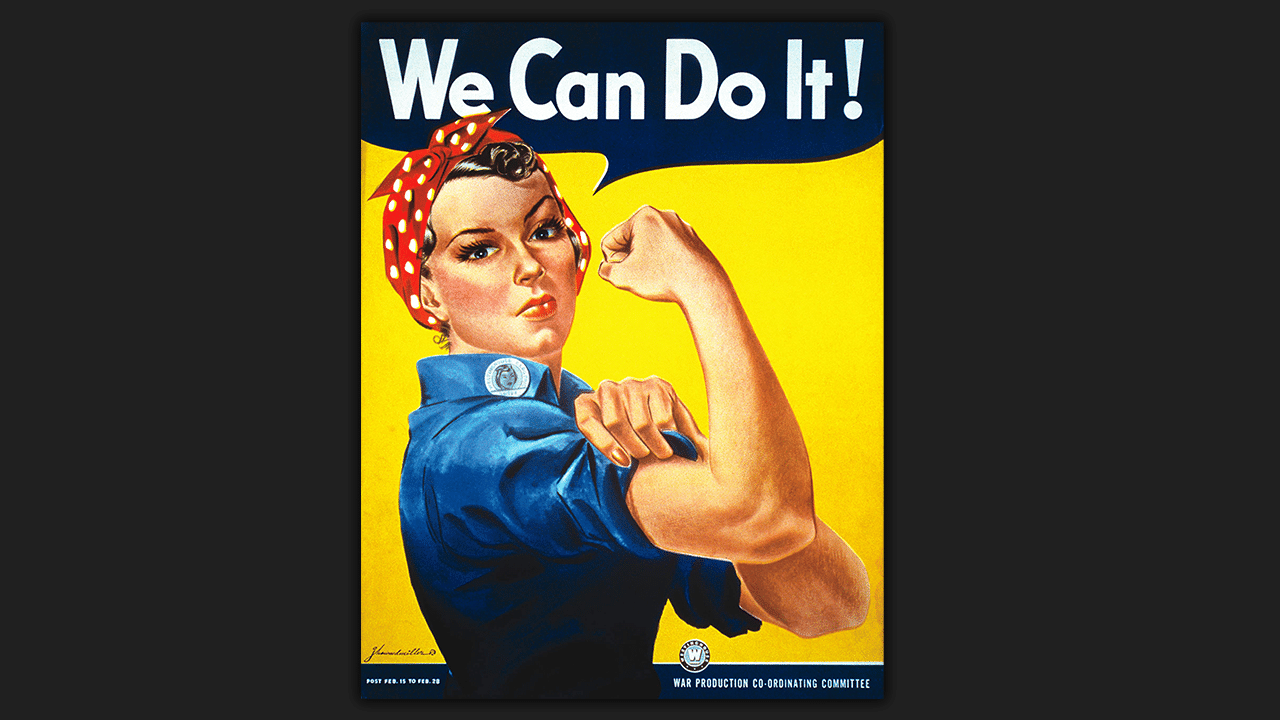 We all know the wartime poster and we all know her name. She was an icon of home front strength during a time when most women were not in the workforce. In fact, prior to World War II, if a woman was working at all, she was in an office as a secretary or behind the counter in a department store. The war changed all that because the majority of young men were overseas fighting, yet America needed warm bodies in the factories to mobilize and support the total war we faced. The Rosie we know today is very familiar, we all recognize the determined face in the poster, but it wasn’t always so.

Rosie the Riveter began quietly with women like Rosalind P. Walter. Rosie was one of the first women to enter the workforce in Connecticut and worked as a riveter building Corsair fighter planes. At just 19, she worked the nightshift on the assembly line at the Vought Aircraft Company. She was interviewed by a syndicated news columnist and the article inspired the 1942 song, Rosie the Riveter.

While other girls attend their favorite cocktail bar
Sipping Martinis, munching caviar
There’s a girl who’s really putting
them to shame
Rosie is her name

All the day long whether rain or shine
She’s a part of the assembly line
She’s making history,
working for victory
Rosie the Riveter
Keeps a sharp lookout for sabotage
Sitting up there on the fuselage

The song took off and so did the factories, but the “We Can Do It!” poster, created by J. Howard Miller and commissioned by Westinghouse Power Company as a morale booster for its employees in 1942, cemented the vision of the factory female we know of as Rosie the Riveter.

During the war years, women in the workforce went from 27% to 37%. Throughout the war, six million women joined the labor force and half of those took difficult and dangerous jobs in the defense industry. Women weren’t just working on aircraft, they were also building warships, tanks, and producing munitions. By 1943, women made up 65% of the workforce in the aircraft industry alone. More than 310,000 women were building bombers. The Rosie the Riveter propaganda campaign was designed to encourage women to work in these factories, and that is exactly what happened.

Inspired by the song and likely by the women, Rockwell painted his own Rosie for the Saturday Evening Post. His model was young Mary Doyle, just 19, a telephone operator near Rockwell’s home. He posed her like the biblical prophet Isaiah from Michelangelo’s Sistine Chapel. She’s strapping and somewhat masculine, and her foot rests on a copy of Hitler’s book, Mein Kampf.

A giant metal riveting gun splays across her lap, and her lunchbox tells us exactly who she is, Rosie. She holds a ham sandwich in her left hand, and the traditional factory overalls she’s wearing are decorated with various war-effort related buttons. She wears a “V for Victory” button, a Red Cross blood donor button, and Army/Navy E-Service production award pin, a Blue Star Mothers pin (which meant she had a son serving in the armed forces), two bronze civilian service awards, and her factory ID badge.

A symbol that was bigger than one or two women, Rosie came to represent the power of the nation’s women, the strength of working together in unity for a common cause, and the patriotic belief in one’s nation. Women held a variety of jobs in addition to factory workers: streetcar operators, taxi drivers, construction, agriculture, office, and government jobs were all up for the taking during the war.

“The biggest thrill—I can’t tell you—was when the B-17s rolled off the assembly line. You can’t believe the feeling we had. We did it!”

-Vi Kirstine Vrooman, from A Mouthful of Rivets

Many of these women were mothers so in order to balance their job and families, they were creative and pooled childcare, cleaning, cooking, and housework. Many chose to share their homes and apartments so they could scrimp and save for the war effort and help each other out. Inventive job sharing began well before the 21st century!

When the war ended, women were expected to return to their “proper sphere” and many happily did so. Some however remained on the factory lines or returned to clerical work. Elinor Otto built airplanes at a California factory for fifty years. One of the “original Rosies,” she worked until she was laid off at the age of 95. It was women like Elinor Otto and Rosalind Walter, and country girl, Mae Krier from North Dakota—regular patriotic American women—that stepped up to support their men, their country, and their families because they were needed.

“We loved our work. We loved our flag. We all pulled together to win the war,” she said. “It was a good time in America.”