Sergeant Ezra Lee and the Turtle – the First Colonial Submarine 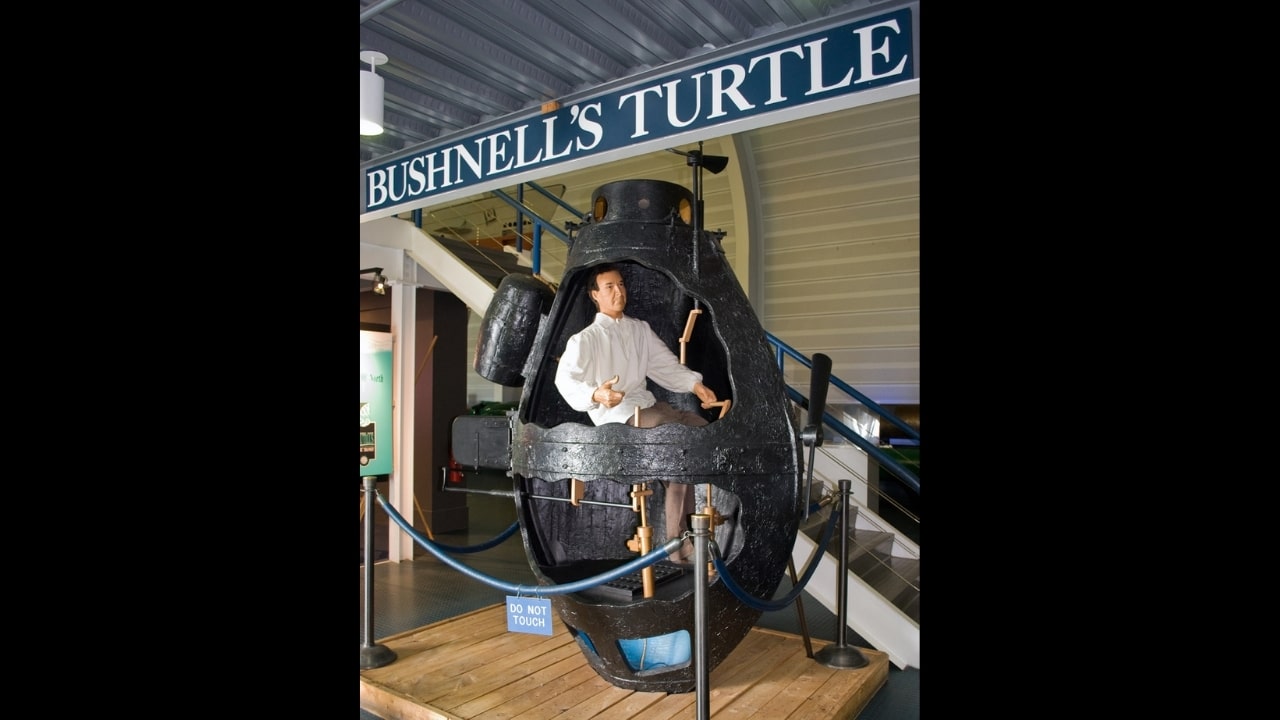 First recorded use of a submarine to attack a ship

On September 6, 1776, one of the most daring and unusual attempts at naval sabotage was undertaken. At the helm of the Turtle, the secret one-man submersible, Sergeant Ezra Lee attempted to attach explosives to the underbelly of the British ship HMS Eagle in the New York Harbor. As the lone pilot and operator, Lee would have been required to control the propeller with a crank to drive the sub forward, adjust the bilge to keep buoyancy, operate the rudder, and surface every thirty minutes to replace the air. It required great coordination and endurance.

Designed by David Bushnell, the inventor of a dependable method for underwater explosive detonation, construction of the Turtle began in April of 1775. Bushnell worked closely with Isaac Doolittle, the metalsmith, engineer, clockmaker, and inventor. Because the design was shrouded in secrecy, it is not known for certain which of the two men designed which parts, but Doolittle’s previous experience and complicated engineering devices he was known for indicate he played a large part.

“…it seems Doolittle designed and crafted (and probably funded) the brass and the moving parts of the Turtle, including the propulsion system, the navigation instruments, the brass foot-operated water-ballast and forcing pumps, the depth gauge and compass, the brass crown hatch, the clockwork detonator for the mine, and the hand-operated propeller crank and foot-driven treadle with flywheel.” *

One of the most significant developments that came out of the Turtle experiment was the propeller. Previous to its design, oars and sails were the method and the means of propulsion. The propeller was described as “an oar for rowing forward or backward” and “a pair of oars fixed like the two opposite arms of a windmill” with a length of 12” by 4” wide. Today a propeller is so common to us that it is hard to imagine the significance of such a development, but it was gigantic at the time.

The hull was crafted by a ship’s carpenter and other skilled artisans from oak and shaped like a barrel, covered in tar, and encircled with wrought-iron hoops. The name, Turtle, came from the shape as it resembled two shells of a tortoise placed together. It measured roughly ten feet long, six feet tall, and three feet wide. It dived by allowing water into a bilge tank at the bottom of the vessel and ascended by pushing water out through a hand pump. It was propelled vertically and horizontally by hand-cranked propellers. It also had 200 pounds (91 kg) of lead aboard, which could be released in a moment to increase buoyancy. Six small pieces of thick glass in the top of the submarine provided natural light.

On the night of the mission, Sergeant Ezra Lee set out at 11:00 pm. It took two hours of strenuous work to make his way through the swift current and the darkness before reaching Admiral Richard Howe’s ship in the harbor. Visibility was problematic and his oxygen was low, but he finally reached the underbelly of the Eagle.

Lee surfaced to light the fuse and attempted to pierce the hull of the ship several times in order to place the device (which he called a “torpedo”). Every time it failed. David Bushnell theorized that Lee had attempted to place the explosive where an iron plate for the rudder was located. Lee tried other spots under the hull but was unable to stay under the ship.

It is highly probable that he was suffering from extreme fatigue and possibly carbon dioxide poisoning due to lack of breathable air. This might have contributed to his inability to affix the explosive. He was subsequently spotted and made for escape. He released his torpedo to drift but the British were wary and avoided it. It exploded “with tremendous violence” but did no damage to the enemy.

After several more hours in the water, Lee made is safely back to the Americans and was congratulated by General Washington on his attempt. Though the mission was a failure, Lee would try again but would be discovered and required to abort. The British managed to sink the ship the Turtle was on, but it is not known what ultimately became of the original submersible. It is believed that she was destroyed so that it would not fall into the hands of the British.

Ezra Lee became a part of Washington’s spy network and was commissioned as an ensign in the Continental Army in October of 1776. He was promoted to 2nd lieutenant, 1st lieutenant, and then as regimental quartermaster all in the year 1778. He fought in the important battles of Trenton, Brandywine, and Monmouth. His sword handle was shot off and he had many bullet holes in his coat from the battle of Brandywine. His headstone reads, He was a Revolutionary Officer, and esteemed by Washington. In 1821, his obituary shared, This soldier is the only man who fought the enemy upon land, upon water, and under the water.

What astonishment it will produce and what advantages may be made…if it succeeds, [are] more easy for you to conceive than for me to describe…
–Benjamin Gale on the Turtle

What an understatement! From the humble beginnings of early submersibles like the Turtle to the Navy’s powerful nuclear submarines of today, Benjamin Gale said it rightly when he used the phrase, “What astonishment it will produce…” To think it all began with intelligent men willing to gamble on the development of something radically new, men like David Bushnell and Isaac Doolittle; and brave soldiers like Sergeant Ezra Lee, willing to take the risks of capture or drowning and death, to advance the cause of liberty.