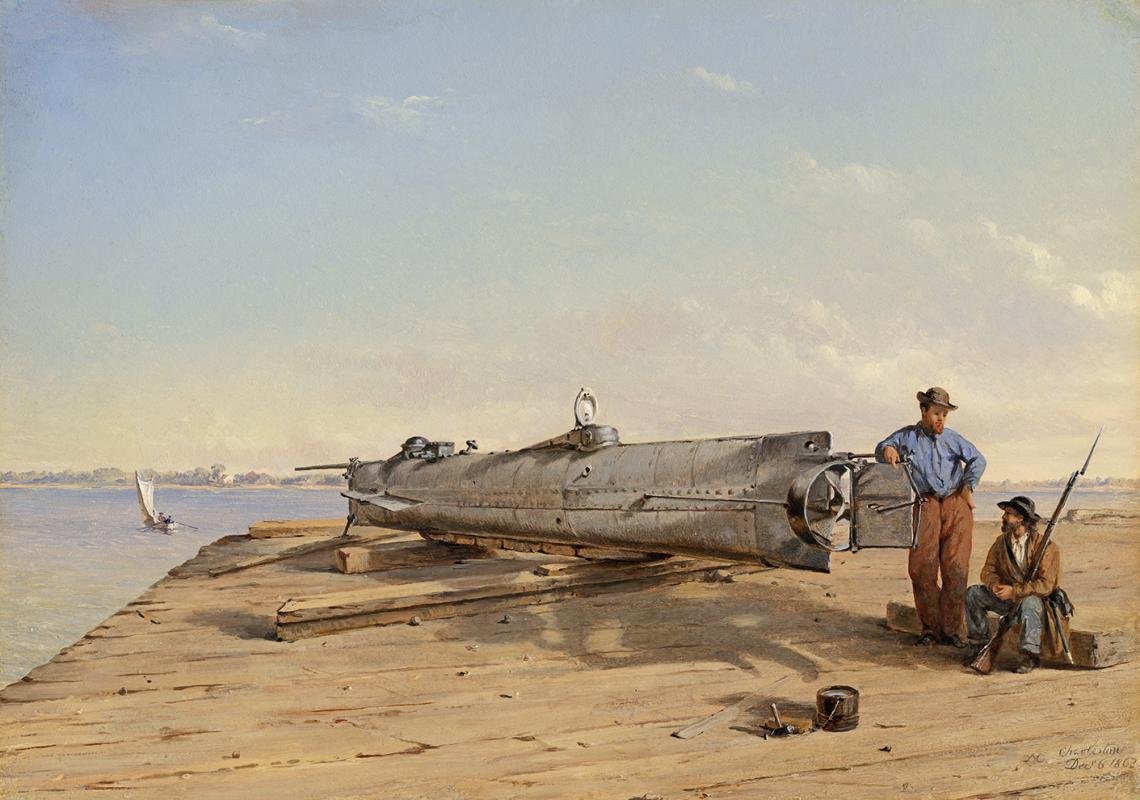 They say necessity is the mother of invention; and that is especially so in wartime. The invention of the H.L. Hunley, the first hand-powered combat submarine to successfully sink an enemy warship in battle, came about with much trial and error and great loss of life, but it was an amazing accomplishment for the beleaguered Confederates in 1864.

In 1861, Union General Winfield Scott had a plan to economically cripple the Confederacy. The South Atlantic Blockading Squadron was designed to block the ports in the south from sending or receiving trade and supply ships. This massive plan required the monitoring of 12 major southern ports and 3,500 miles of Atlantic and Gulf coastline. Only those ships willing to “run the blockade,” and risk destruction or arrest, were able to get through. Those that did offered little supply to what was overwhelming demand. The south was desperate; and that desperation produced ingenuity.

The Confederate government offered up to $50,000 to anyone who could sink a Union warship. Horace Lawson Hunley, a Confederate marine engineer, worked on two unsuccessful early models of submarines with others before organizing and funding a third entirely on his own. His creation was a cigar-shaped tube that was 40 feet long and wrapped in 3” iron plates. The crew of eight hand-cranked a single continuous screw that spun the propeller–all in a very cramped space of only four feet!

It was initially designed to dive below the target ship and tow the “torpedo” (a copper keg filled with gun powder) behind it by way of a 200-foot rope. The idea was that the submarine would pass under the keel of the target ship and then the explosive would be triggered and impact its hull on the other side. This process was successful in testing on an old barge so they moved forward.

Confederate Admiral Franklin Buchanan wrote to General Beauregard and said, “I am fully satisfied [the Hunley] can be used successfully in blowing up one or more of the enemy’s Iron Clads in your harbor.” The Hunley was boxed up and sent by rail to Charleston, South Carolina, one of the major port cities suffering under blockade.

Two failed test runs in the harbor resulted in the Hunley sinking twice along with the tragic deaths of 13 crewmen, including its inventor, Horace Hunley. Deserting Confederate soldiers apprised the Union’s Rear Admiral John Dahlgren about these test runs so he ordered his blockaders to anchor in shallow water and told the crew to hang chains and ropes off the sides as a deterrent. He set patrol boats on the waters to keep watch as well.

Courage Under the Waves

The third all-volunteer eight-man crew of the Hunley were unbelievably brave. They all knew the risks they were taking. After the previous loss of 13 men, General Beauregard expressed his skepticism, “It is more dangerous to those who use it than to the enemy.” However, the Hunley’s southern backers believed it would work and that the Union blockade could be broken by the submarine. General Beauregard gave the go-ahead with one condition; the submarine had to operate just under the surface of the water.

The Hunley needed some modifications so this time, instead of dragging the torpedo behind, a 16-foot spar was affixed to the front of the sub and at the end of the spar, the keg of gun powder was attached. The aim was to ram the spar into the hull of a Union ship, back off to a safe distance, and then detonate the torpedo now fastened onto the side of the ship. The crew worked together and learned how to operate and navigate the submarine for two months.

Commander of the Hunley, George Dixon, expressed his frustration with the ocean conditions in a letter to a friend, “…to catch the Atlantic Ocean smooth during the winter months is considerable of an undertaking and one that I never wish to undertake again.” On February 17, 1864, in unusually calm waters about five miles off the coast, at the entrance to the Charleston Harbor, they set off for the USS Housatonic. She was a 1,240-long-ton, wooden hulled, screw sloop-of-war that belonged to the United States Navy, and she was almost brand new.

The H.L. Hunley was sighted by the crew of the USS Housatonic, but its approach was too rapid to do anything to stop what was coming. The crew of the Hunley detonated the torpedo and its 135 pounds of black powder blew a hole on the starboard side of the ship. The water started pouring in and the Housatonic sank in less than five minutes. Remarkably, only five aboard lost their lives. The crew of the H.L. Hunley had done it! They were the first combat submarine to successfully sink an enemy warship in battle, but they would pay a terrible price. All eight crew members and their submarine disappeared below the waves and were not seen again for over 130 years.

In part two, the H.L. Hunley and her crew is recovered. Stay tuned!