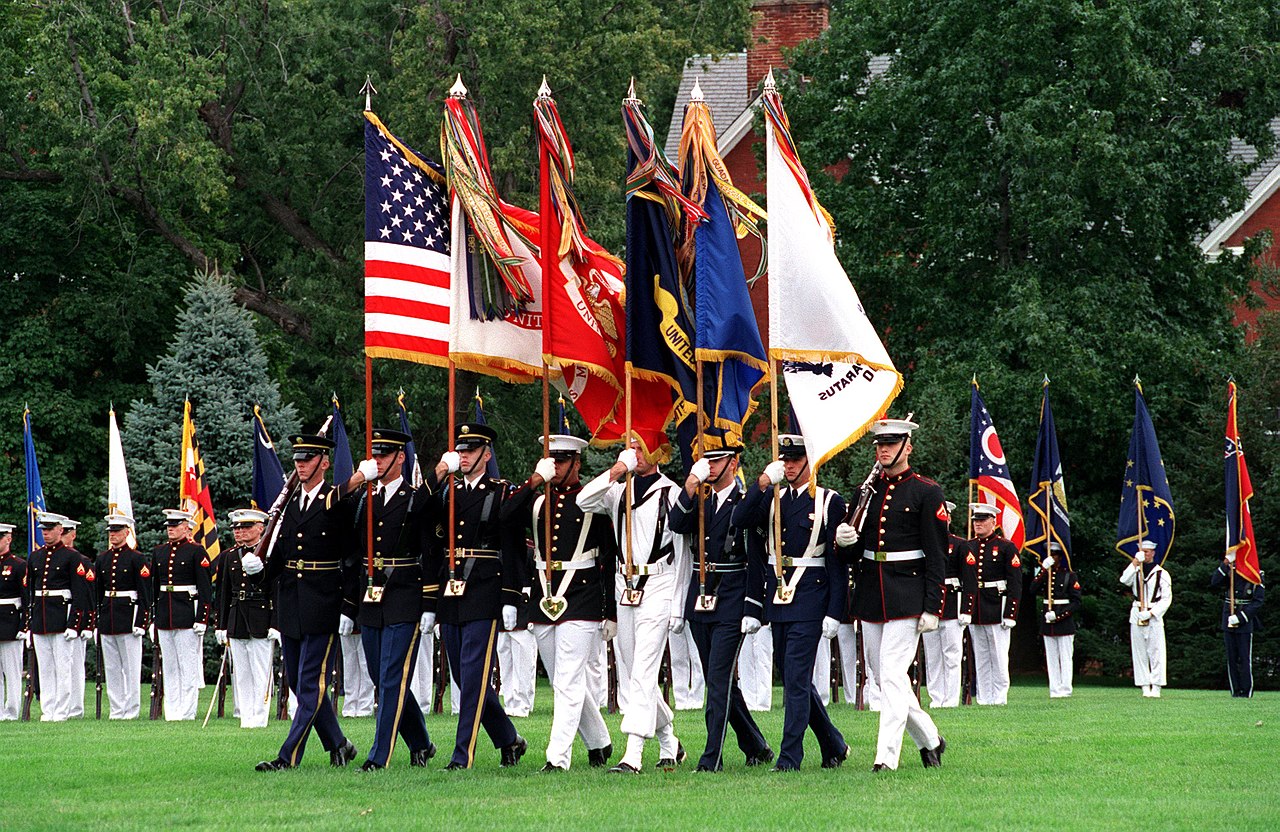 I pledge allegiance to the flag of the United States of America, and to the republic for which it stands, one nation under God, indivisible, with liberty and justice for all. With this simple promise, we give our oath of loyalty to our flag and to our nation. Most of the time we say it with our right hand over our heart while we are facing the flag unless you are in military uniform and then you will give your military salute while remaining silent as others pledge. It is a powerful demonstration of patriotism and dedication and it is only given to the Flag of the United States of America.

There is an order to all things beautiful and ceremonial. Our country and military flags are included in this order and beauty. If you have ever wondered about flag presentation, or why they are displayed in a particular way, it is due to the Department of Defense guidelines for the flag of our nation and those of our military. There is a precedence, or ceremonial order of rank, when the flags are presented in parade, or in some other military context. They should be displayed from the viewer’s perspective from left to right, with the Flag of the United States of America in the number one spot on the left. When presented with other flags, the American Flag should always be larger than the other flags.

The flag has 13 alternating red and white stripes that represent the 13 original colonies. There are 50 white stars on a blue field represent the 50 states. Red stands for valor and bravery; white for purity and innocence, and blue for vigilance, perseverance, and justice.

After the American Flag, the order of precedence goes like this:

A flag bearer has a great responsibility and there are many regulations regarding handling and care for each branch, but most especially for the American Flag.

Out of respect for the American flag, we are told not to:

When the flag passes you by in a parade or review, Americans are to stand at attention, face the flag, and place their hand over their heart. Uniformed military should salute. The flag should be displayed from sunrise to sunset unless there is illuminated during the night. The flag is not to be left out in inclement weather.

Throughout our nation’s history, flags have been incredibly important to us. They were carried into battle to represent one’s regiment or platoon. They symbolized liberty on foreign and home soil alike. Indeed, Francis Scott Key was inspired to write what became our National Anthem, “The Star-Spangled Banner,” during the barrage of shelling at Fort McHenry by the British Royal Navy during the War of 1812.

O say can you see, by the dawn’s early light,
What so proudly we hailed at the twilight’s last gleaming,
Whose broad stripes and bright stars through the perilous fight,
O’er the ramparts we watched, were so gallantly streaming?
And the rocket’s red glare, the bombs bursting in air,
Gave proof through the night that our flag was still there;
O say does that star-spangled banner yet wave
O’er the land of the free and the home of the brave?

Because of those willing to carry, represent, or honor the flag and our nation, it does undeniably still wave, over the land of the free, because of the brave.