Let Slip the Dogs of War 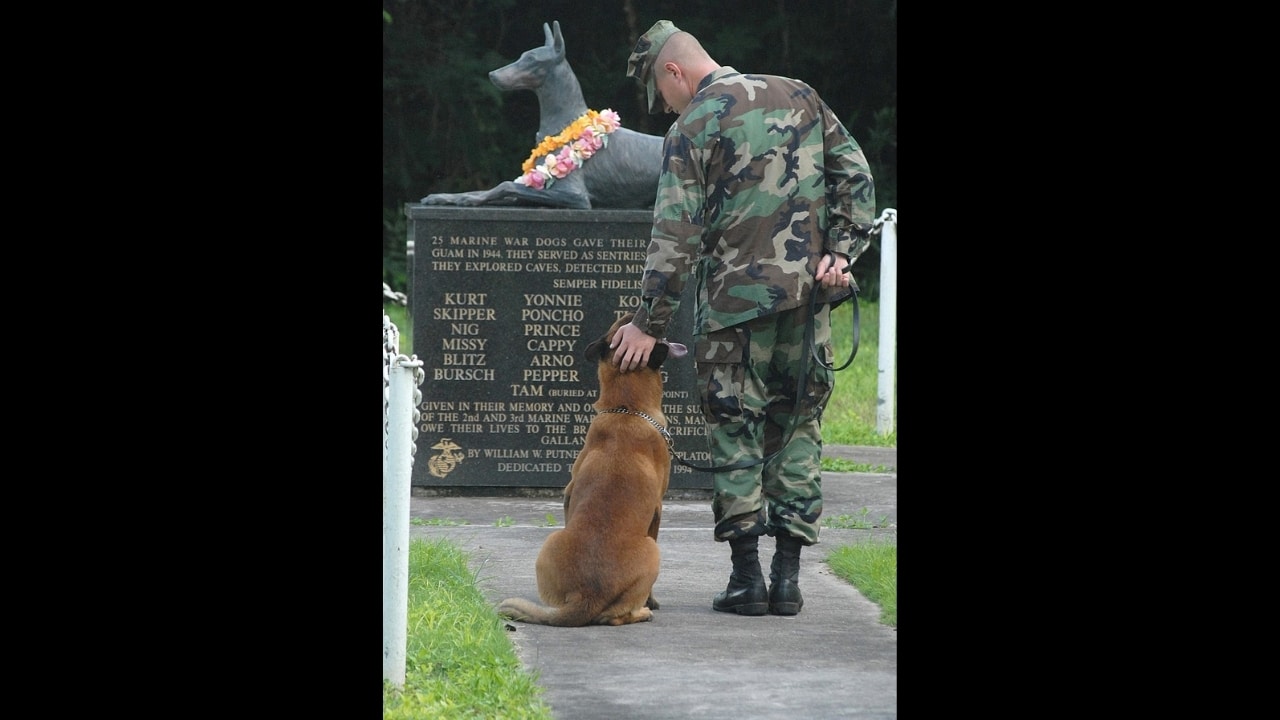 The Contributions of Military Working Dogs

They say a dog is a man’s best friend, and that is often true, but they are also powerful warriors willing to protect and defend the lives of their human companions. The history of dogs in battle is a long and rich one, and dogs have had their place in law enforcement and warfare for thousands of years.

The first recorded use of dogs in battle is from the King of Lydia around 600 BC. The King ordered that large and fierce dogs should accompany his troops when they repelled the enemy. These dogs attacked and tore their adversaries to pieces. Another ancient warrior from Egypt, Cambyses, used animals in quite a different way. When attacked by an enemy using damaging siege engines, Cambyses placed dogs, sheep, cats, and other animals the Egyptians held as sacred on the front line, and his enemy immediately stopped the attack.

In the middle ages, dogs were used for all sorts of things from guard/sentries, hunters, water-drawer, messenger, and were even used to turn the meat on the spit. Bloodhounds were used by the town sheriff to hunt down outlaws. In Scotland, bloodhounds were known as “slough dogs” where we get our word “sleuth” (or today, detective). Their highly developed sense of smell helped in countless situations and were even used in an attempt to hunt the serial killer, Jack the Ripper.

In the United States, there was no organized canine corps until World War II, but dogs definitely joined their masters in the war arena during the Civil War. Some soldiers brought along their dogs from home and strays often joined a regiment. Where a dog was, morale increased. They were used as messengers and trackers, but some could also locate water or hunt for small game for the men in the unit. There are beautiful stories of loyal dogs unwilling to leave their wounded or slain masters too.

World War I brought heroic little dogs like Sergeant Stubby and Rags, a beloved terrier who was adopted by the U.S. 1st Infantry Division as its mascot. He learned to run messages attached to his collar from the front line to headquarters at the back of the line. “In July 1918, Rags … and an infantry unit of 42 men were cut off and surrounded by Germans. Rags carried back a message which resulted in an artillery barrage and reinforcements that rescued the group.” Like Stubby, he also barked to warn his troops about incoming shells and won many medals and awards for his canine valor.

In 1942, both the U.S. Army and the U.S. Marine Corps developed their own canine programs, but initially the Quartermaster Corps of the Army was solely in charge of all dog training used in the Army, Marines, U.S. Navy, and the Coast Guard. Seven breeds were eventually chosen: Belgian sheep dogs, German Shepherds, Siberian Huskies, Doberman Pinschers, Collies, Malamutes, and Eskimo Dogs. The dogs were trained for 8-12 weeks, depending on the needs of the units. They were taught to work in mine-detection, sentry/guard service, scout and patrol, or as messengers. While all war dogs were important, it was during this time that the USMC learned the value of the Doberman Pinscher (or “Devil Dog”).

Devil Dog Dobermans and the Marines

Dobermans were invaluable to the Marines when they landed in Guam. The dogs not only stood guard, but they were also trained to alert when they discovered landmines or traps, delivered messages, searched caves, and rescued wounded Marines. “One night, a Doberman sentry named Cappy was standing guard over 250 sleeping Marines when he detected the presence of the Japanese. In fact, an enormous force of Japanese troops was advancing on the unsuspecting camp when Cappy alerted his men. The heroic action of Cappy saved the lives of 250 men…” *

The equivalent heroic dog for the Army’s 3rd Infantry Division was a German Shepherd names Chips. He was a sentry dog and in the midst of his rounds, “…broke away from his handlers and attacked an enemy machine gun nest in Italy, forcing the entire crew to surrender.” * Chips had been donated to service by a private family and shipped out to the War Dog Training Center in Virginia in 1942. He was discharged in December of 1945, and returned to his family. In 1990, a film was made about him.

March 13 is National K9 Veterans’ Day. It is set aside to honor all the military working dogs for their amazing service and sometimes, ultimate sacrifice for our nation. Many dogs died heroically while protecting their humans and there are several national memorials in remembrance. Among these is the National War Dog Cemetery; a monument to working war dogs on the Naval Base in Guam. It is mainly dedicated to the sacrifices of Marine dogs in the Pacific theater, but there is no question that the contributions of all dogs in all branches is incalculable.