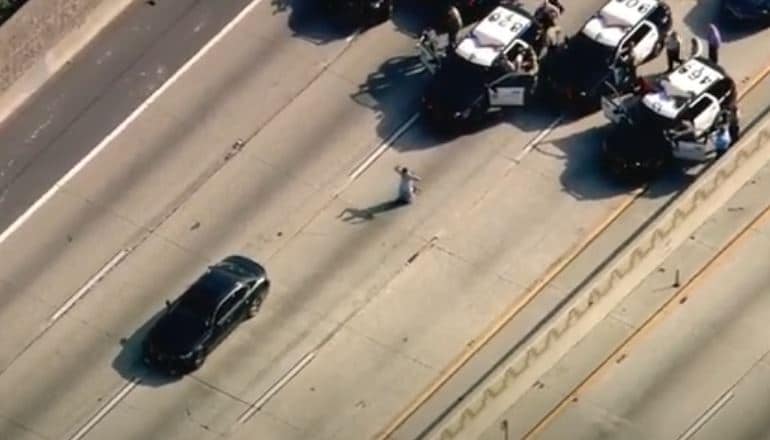 When an L.A. man went to pick up his Tinder date, the last thing he expected was for his vehicle to be at the center of a car chase.

Around 1 am on January 5, a man swiped right and matched with a woman on the popular Tinder dating app. At her request, he drove over to her home in Pico Rivera, according to KTLA.

Man Realizes This Isn’t the Night He Had In Mind

As the man arrives at the woman’s home, she asks him to get a friend at Alondra and Firestone boulevards. A short while after, the male friend enters the vehicle. He pulls a pistol out.

The female and male assailants tell the man to empty his pockets and give them his phone and wallet.

After, they make him drive around to multiple ATMs, withdrawing $240, according to a statement made to KTLA from Los Angeles County Sheriff’s Department Lt. Tenya Brown.

Brown said the male assailant had the man randomly drive around Whittier for a few hours, attempting to confuse him. After, they told the victim to exit the vehicle.

Brown stated the vehicle was put into the Sheriff’s department system as involved in a situation with people considered armed and dangerous.

Since the assailants took the victim’s phone, he was able to track its location. A location he communicated to the Sheriff’s office.

As a result, deputies canvassing in the vicinity saw the vehicle around 11:25 am. The deputies followed the vehicle as it drove onto the 5 freeway.

One of the Sheriff’s deputies successfully applied the PIT maneuver bringing the vehicle to a halt. As a result, deputies took all five suspects into custody without further incident.

An Example of Precise Maneuvers

High-speed chases have the potential for disaster, especially when they span several city blocks, ending up on a busy freeway. The L.A. Sheriff’s department carefully used their training to prevent any harm from coming to other motorists.

Their use of caution and reliance on their training prevented a shoot out with the assailants, bringing all 5 in without a single deputy having to fire their weapons.

If the assailants had not followed the officer’s precise instructions, the end result could have been very different.